Before the web, everyone had a Rand-McNally map in their car. Once the web was prevalent, MapQuest was the destination for getting maps online. Then around 2005, Google began to pull market share from MapQuest and is finally now surpassing MapQuest.

If you go to Rand-McNally nowadays, it looks like MapQuest did back in 2005.

My question: Why wasn't Rand-McNally the online leader the whole time? They had the data (the hard part) and just needed a way to get it online, then have a very small group of experienced web developers and software engineers make improvements over the years. 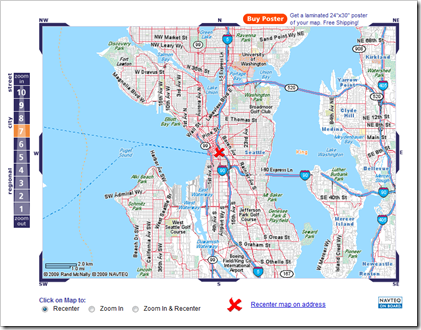 Google's draggable maps were the rage back in 2005, using AJAX technology that was not widely supported at the time. There's no reason why Rand-McNally couldn't have owned this space, and run the MapQuest style maps for browsers that didn't support AJAX at the time, and offering draggable maps where supported.

Now in automobiles you have TomTom and other GPS systems for navigating the road without a paper map. Rand-McNally has its own, but still nowhere near Garmin or Magellan.

This is not meant as a rant against Rand-McNally. It's a rant against companies who have the resources but shallow vision. Where is the long-term vision? Or is the vision there but you're too large to move quickly?

If you work in an industry that could do so much with what it has but crawls in terms of progress, perhaps it's time to go somewhere else, or take advantage of the situation and create a competitor that blows them off the map.

In these days a small player can get word-of-mouth faster and more widespread than ever. MapQuest (an unknown) beat Rand-McNally. They blew their brand off the internet. Did you even know Rand-McNally had a map site? I didn't.

So don't be afraid if you're going against a giant company. If you can deliver a better product, the brand name is inconsequential.

A Business Lesson from Dune

He who can destroy a thing, controls a thing. – Paul Atreides And if that thing is valuable, you…

In the last article on advertising, I introduced you to the complexity of Adwords and the promise of Trada.…