I'm still new to Docker, and the hype is real - it's a really compelling technology. Docker provides a unique way of isolating services and their dependencies.

This blog is running on containers!

This blog is running on 3 Docker containers running:

As you can see in the diagram, we have the Docker engine installed on Ubuntu on a server, and 3 containers running in the docker engine environment. 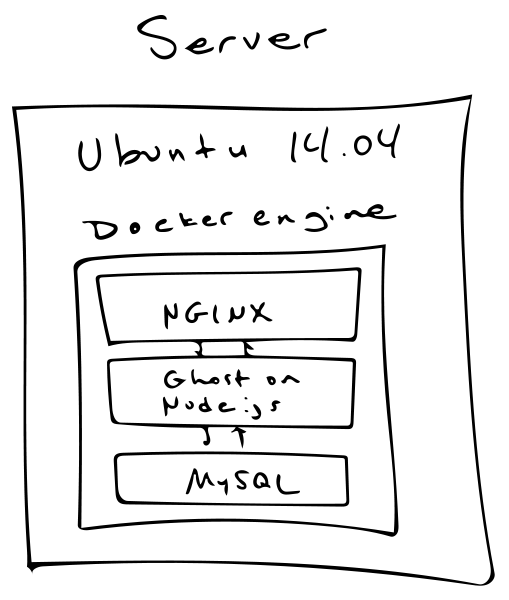 Here's the entire setup if you want to use the same for your own blog:

I'm a big fan of Ghost as a blogging system. It's simple and fast, and is made just for blogging.

Clone the project above onto a server, install Docker, and in a few seconds you'll have a running blog. Setup instructions here. Since the project uses S3 and Cloudfront for images, the only thing that will take you a bit to set up is making an S3 bucket and a Cloudfront distribution.

Docker containers run one process, so they do one thing.

Containers can easily connect to each other using "links". Linking containers means they can communicate with each other over the network. Each container can expose a port to allow connections.

The old way, which still works great (I use it every day) but can be cumbersome, is to have a server set up for a few things. For example, a web server running an application:

The server is running:

You may perhaps have a database on the same server if it's a small operation.

Setting up each server, doing updates, and maintaining them to work together can be a pain over time.

By isolating a service within a container, it's easy to replace an old, outdated container with a new one. Or if you need 7 containers that do the same thing, just spawn 7 of them.

Each service is small. Each doesn't have the overhead of an entire OS. Each container has an OS, which is specified by the container's author, but if you have 4 containers running the same version of Ubuntu, you don't have 4 operating systems taking up 4 times the space on the same host. They only take up the space of one. Docker accomplishes this through the use of the union file system (UnionFS). As a container is built, it creates layers. Identical layers are shared with other containers, so the space needed is minimized.

Unionfs is a filesystem service for Linux, FreeBSD and NetBSD which implements a union mount for other file systems. It allows files and directories of separate file systems, known as branches, to be transparently overlaid, forming a single coherent file system. Contents of directories which have the same path within the merged branches will be seen together in a single merged directory, within the new, virtual filesystem.

Most containers don't run a full-blown OS. Many use a bare-bones distribution like Alpine or Busybox. Alpine only takes 5 MB.

Here's an example of the layers that build up on two containers shown side-by-side, one built on Busybox and one on Debian, but sharing a kernel. 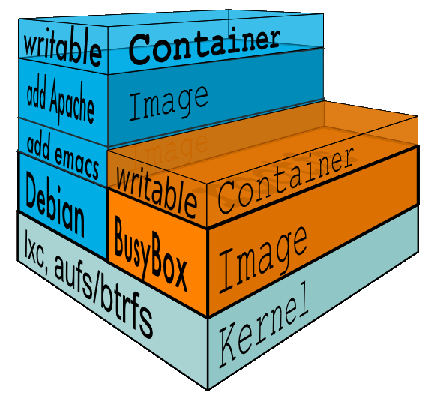 Containers are the writeable layer that sit atop an image. An image is the blueprint of a container.

Why containers and why now?

Microservices are all the rage right now. Microservices are single-purpose services that accomplish one task in the vast scheme of an enterprise datacenter. They are self-contained, and usually manager their own data so they have no external dependencies. A service receives a request or a message, and does a task, and then waits for the next. When a new service rolls out to replace the original, you can divert traffic from the old service to the new one, and eventually kill off the old service.

This contrasts with deploying services to servers, and later re-deploying to the same servers. With servers being so cheap and disposable nowadays, it's easier to spin up a new server, run a container on it, and migrate traffic to it. Over time, you end up on newer, faster hardware, with better services.

There's a lot to cover in terms of microservices. I won't go into more detail here, but you can see where microservices and containers seem to be made for each other. They both fit a philosophy of disposable, temporary, single-purpose services that evolve over time.

Compose is a tool for defining and running multi-container Docker applications. With Compose, you use a Compose file to configure your application's services. Then, using a single command, you create and start all the services from your configuration.

All the service-to-service network connections are laid out in the docker-compose.yml file, as you can see here. This is much easier than running containers and setting the network settings (links to other containers) on the command line.

Docker-compose brings up all the services together, and brings them down together gracefully.

Docker has a few tutorial videos on their site to get you started.

I got my start with this comprehensive book by Adrian Mouat: Using Docker. Published in 2016, it has up-to-date coverage of Docker. It's a great start and my go-to reference. 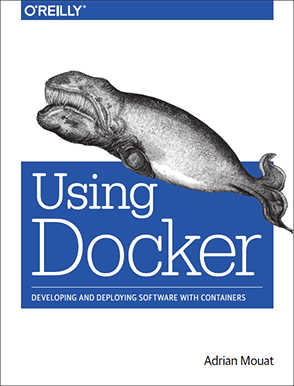 I'm running this on an EC2 t2.micro at 1GB RAM. I tried to limit MySQL's memory limit because it was taking up, what in my opinion, was too much.

Adding this to the mysql: block in docker-compose.yml will limit memory:

I tried 256 and 384. Both caused issues with MySQL. Instead of continuing to experiment, or trying to tune MySQL in a container (no thanks), I just removed the limit.

Back and Ready To Go: Starting with C

So I've completed all the work needed for my business, and there are good people in place to keep…

Mind the Gap in Posts

Since I'm running my own business, and there is a good bit of engineering on my part to do,…