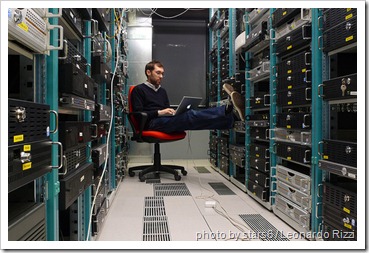 If you're a programmer writing web software, you don't need this article. Move along, please.

This article is for the businesspeople. You've got a great startup idea but you don't know much about web server technology. You want to build your business, and will be looking for a contractor or programmer friend to build out your prototype or the whole thing. This article will guide you to what's out there as far as server environments.

In this article I'll use the word implementer to describe whomever will be doing the IT/programming work for your startup: your cousin, your friend from work, the contractor you'll line up.

What is a server?

A server is a computer built for serving web pages, email, data, video, etc to visitors and other servers. It typically doesn't have some of the things that your home computer has: fast graphics card or audio card. Many servers don't look like your computer – they use different cases that can be housed compactly in a server rack (see photo above).

The next thing to consider is what software will run. For a web server, you'll need web server software, and a way for the server to run web programs that your programmers write. Here are two popular configurations (or stacks):

For OS X Server, Unix, Solaris, and FreeBSD, you can substitute for Linux in the table above.

Which of the many configurations you decide to use will depend on your implementer.

If you have no implementer and are trying to figure out the best way to go, I have to throw in my recommendation.

Because the focus of Startup Next Door is to help you start your business as inexpensively as possible and keep costs down, I recommend the second configuration above (Linux and Apache).

The main reason for this choice? It's all free. Your implementer can download everything they need to configure your server and start work without touching the company credit card:

Why not Windows or OS X Server or non-Linux?

Because I'm cheap. When I started teaching myself programming, I didn't have the money to buy the development tools or server software to run it.

In order to run a Windows setup, you'll have to buy the server software, database software, and (if your implementer doesn't have it) a copy of Visual Studio.

I'm not a Windows hater. In fact I'm writing this using Windows Live Writer on a computer running Windows 7. I've never had a Mac, but if you want to buy me a MacBook Pro, I'll use it without hesitation.

Where do I get a server?

I'll cover that in the next post. It's cheaper than you think.

To the Nerd Crowd: When it comes to a non-Linux stack, I'm in the dark for the most part. Please comment below and tell me where I've made a fool of myself.

Update April 1, 2010: Thanks to Wade in the comments below, I added a post on Microsoft's BizSpark program.

The regularly scheduled post will be a little late, as I'm waiting to hear back from Rackspace. So a…

A Better Voice for Your Business Than Yours

I mentioned yesterday about a service that will record a professional voicemail greeting and phone directory for you. Today…