Geometric algorithms involve questions that would be simple to solve by a human looking at a chart, but are complex because there needs to be an automated process.

One example is: given four points on a 2-dimensional plane, and the first three of the points create a triangle, determine if the fourth point lies inside or outside the triangle.

Another geometric problem is: given a number of points on a 2-dimensional plane, compute the minimum number of boundary points, that if connected, would contain all the points without creating a concave angle.

Here is one of the solutions I generated in Python: 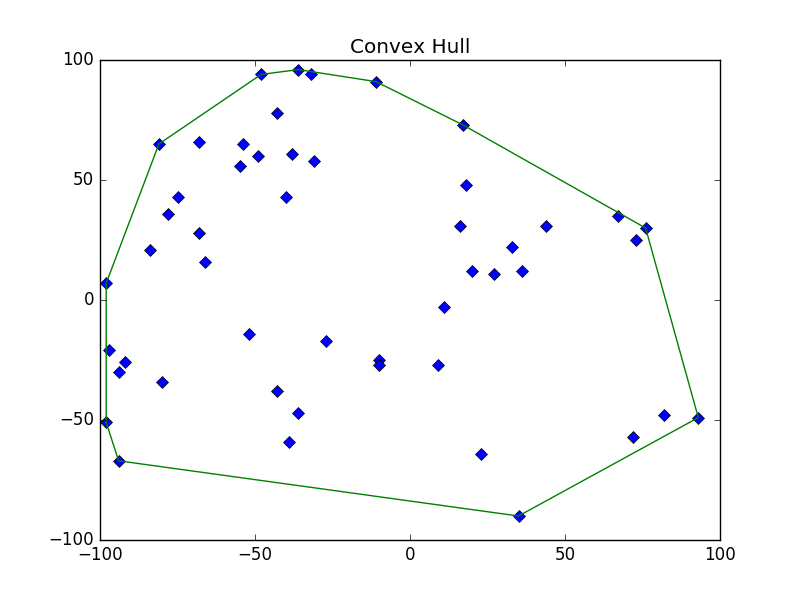 So how do you do it?

I got a clue from a lecture. It involves using a point as a pivot and determining which of two other points are the most clockwise from each other.

Before I watched more of the lecture, I was determined to figure out an algorithm that would solve it in a reasonable amount of time.

In order to "prematurely optimize" (I know it's bad) I was trying to make the all the comparisons only on points to the right of p, but then I would need to flip and go the other way once the max x value was reached.

It was turning out to be way more complicated than it should be. I was trying to get it from O(n2) down to O(n log n) but really all my optimizations were just making it O((n log n) + (n * h)).

So I tore out a bunch of code and just got it working. And it worked beautifully.

I got rid of all the code that figured out if comparison points were to the right of the pivot point. They didn't help improve the complexity.

I was able to remove the sort, also. It wasn't needed. I could find my start point, the minimum x-value point, in linear time. It didn't matter what order the comparison points were in, since I was keeping track of the maximum clockwise-dness as I went along, the same as a linear search for the maximum value in an unsorted array.

This was the new way:

I ended up with h pivot points, each comparing its n neighbors to the one with the maximum clockwise angle.

So I watched the rest of the lecture and it turns out my algorithm was one of the 2 solutions. It's called the Jarvis march, aka "the gift-wrapping algorithm", published in 1973.

The other algorithm, at O(n log n), uses a sort and then a simple single pass of all the points, and making only left turns as it goes around the perimeter counter-clockwise. When the next point is a right turn, it backtracks past all points (using a stack and popping points off) until that turn turns into a left turn. This algorithm is called the Graham scan.

Machine Learning: The Future has Arrived